When we first meet Kieran, he is dead. Or rather, he may be dead, he thinks he is dead but he seems alive to us. We next see him when he appears to be trussed and gagged on a bed outdoors. It is only in his next iteration that he and we realise he is in a hospital bed, his face bandaged, his leg in plaster, constrained by a cage, and looking out at the the night sky.

Kieran has been involved in a serious car accident, of which he has no memory. We learn that the driver, his boss, Cronin Brenner (another character seemingly named after a writer), was the driver and he was killed, as were the two people in the other car.

However, before he and we learn this, Kieran is visited by a man who Kieran initially thinks is a doctor but who seems intent on murdering Kieran. Kieran barely survives but is saved when a real doctor with a real nurse turn up. The murdering man, whom he nicknames Bum Farto, possibly after this man, reappears several times. To us he seems like a nightmare, but Kieran is convinced that he is real. 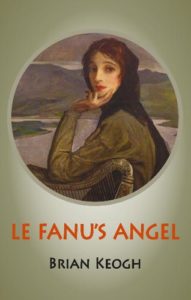 While recovering, another patient – Martin Doherty – is brought into his room. Doherty tells Kieran that he is dying of throat cancer. When Kieran wakes up one evening, he sees a young woman talking to Doherty. She then comes and talks to him. He is very much attracted to her and she explains to him that Bum Farto is a demon but he is gradually weakening and she is there to protect him. She also tells him that she met the real Sheridan Le Fanu (he died in 1873) and gives him a copy of a book of the poems of Dante Gabriel Rossetti. Her name is Aiofe and she reminds him of Hazel Lavery, well known in Ireland as her picture appeared on the old Irish banknotes. Her most famous portrait, with her representing Kathleen Ni Houlihan, appears on the cover of this book, as you can see to the left.

Kieran will later see Doherty dead which will upset him, as he is very afraid of death (he had seen his parents die and his favourite uncle has disappeared, presumably dead). Orderlies will later come and remove the body. He will later learn from a nurse that he has been in the room on his own all the time and there had been no other patients. He will learn still later on, from an orderly, that there had been a Martin Doherty in his room but he had died a couple of weeks before the arrival of Kieran.

Kieran makes a rapid and surprising recovery and is soon back at work. However, he continues to be haunted by a fear of death. He imagines Bum Farto is after him, though as far as he is concerned, this is not his imagination but real. A psychiatrist suggests he might have Cotard’s Syndrome and, anyway, these visions are a result of his trauma and he will recover.

Kieran’s uncle Jasper, the one who has disappeared, had set up the advertising agency now called Aardvark-Sheridan and he employed Kieran. His intention was that Kieran take over, when he retired/died. However, because he got caught up in the crash of the world and Irish economy, he lost control of the agency so that it is now owned by the Brenner family, with Kieran having a ten percent stake. Cronin Brenner, the boss who was killed, was the eldest son of the owner, Larry Brenner. Cronin is replaced by his younger brother, Quinn. In addition to the agency Uncle Jasper owns a large house. There is a luxury flat attached to the house, where Kieran lives. The main house has remained empty. Who owns the building is not entirely clear, not even to Kieran.

The rest of the book is concerned with various matters. Firstly there is the ownership and the management of the agency, which is decidedly murky and we get into dirty deeds galore, as Ireland was then – and may still be – caught up in corruption, drug dealing and the illegal activities of the IRA.

Secondly, Kieran still seems to drift in and out of this life and the otherworldly life represented by Aoife, on the good side, and Bum Farto on the bad side. Thirdly, it seems that Kieran has a guardian angel, presumably Aoife, as anyone who tries to cross him finds out.

Prior to his accident, Kieran had seemed to his friends and colleagues to be a nice person but not a dynamic, forceful person. He does not bring in much business but what he does bring in, he does well. He seems to have given up any hope of being the head of the agency. All this changes after the accident. He becomes tougher, more determined, scared of little and more ambitious. He also seems determined to take over the agency.

All these issues coincide, as the body count mounts, corruption is rife, and Kieran’s other world makes frequent appearances. Angelbeest, Nithael the Nikromantzer and the Devil Lords of Asmodeus all put in an appearance and Keogh is clearly both channelling and mildly mocking Sheridan Le Fanu.

The Gothic novel has a long tradition in Ireland. In addition to Le Fanu, Bram Stoker, author of Dracula, was Irish and Oscar Wilde’s The Picture of Dorian Gray is a famous Gothic novel. This list shows that the Gothic novel is still going strong in Ireland. Melmoth the Wanderer, which inspired a recent modern English novel, The Children of the Abbey and The Jewel of Seven Stars are three other examples.This is one of several texts on the topic.

Keogh does an excellent job of both channelling/mocking the Irish Gothic novel tradition, telling a good story of good (relatively) versus evil, showing the corruption and dark side of modern-day Ireland and keeping us guessing to the end where it is all going to end up.

The key issue for Kieran is death. He has been exposed to it in childhood and nearly experiences it himself later and, indeed, is never really sure if he is dead and imagining he is alive or really alive. He is a witness to a few deaths in this book and the cause of a few. He frequently confronts death or the threat of death in his otherworld visits (he calls them deathmares). In short death hangs over this book but, to a certain degree, Keogh is mocking our obsession with death. This book is definitely a worthy addition to the Irish Gothic tradition.

This website uses cookies to improve your experience while you navigate through the website. Out of these cookies, the cookies that are categorized as necessary are stored on your browser as they are essential for the working of basic functionalities of the website. We also use third-party cookies that help us analyze and understand how you use this website. These cookies will be stored in your browser only with your consent. You also have the option to opt-out of these cookies. But opting out of some of these cookies may have an effect on your browsing experience.
Necessary Always Enabled
Necessary cookies are absolutely essential for the website to function properly. This category only includes cookies that ensures basic functionalities and security features of the website. These cookies do not store any personal information.
Non-necessary
Any cookies that may not be particularly necessary for the website to function and is used specifically to collect user personal data via analytics, ads, other embedded contents are termed as non-necessary cookies. It is mandatory to procure user consent prior to running these cookies on your website.
SAVE & ACCEPT